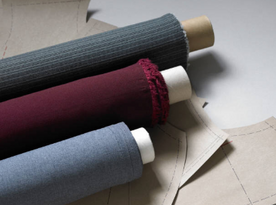 Myriam Belasse, designer, ghost designer to others and owner of Atlanta Sewing & Patternmaking Services, LLC, has devoted her entire career to the fashion industry. Belasse studied at New York's Fashion Institute of Technology and ran her Belasse Collection showroom in the heart of the garment district for over five years. She has worked with high-end private label companies with brands like Donna Karen, Bebe, Saks Fifth Avenue and Calvin Klein. Belasse brings to the table decades of experience as a designer, patternmaker and industry consultant. She has been designing and sewing beautiful creations literally since her teenage years. She is an artist, a business woman, an educator, a philanthropist and a world traveler.